By his judgment of 14th February 2020, Roger Wyand QC, sitting as a Deputy Judge of the High Court, held that the doctrine of ‘issue estoppel’ applied to limit the extent to which a proprietor of a divisional patent could relitigate the issues which were the basis, or groundwork, of the Court’s findings in a previous judgment in respect of a parent patent.

In this case, the parent patent had been the subject of findings by Mr Justice Arnold, as he then was, in Eli Lilly and Co v Genentech Inc [2019] EWHC 387 (Pat) of obviousness (in respect of certain antibody claims) and of insufficiency for lack of plausibility (in respect of therapeutic claims directed to the treatment of psoriasis).  That trial involved four counsel from Three New Square (Andrew Waugh QC, Tom Mitcheson QC and Stuart Baran for Lilly; Justin Turner QC for Genentech). This previous action was described by Arnold J as ‘one of the most complex patent cases’ he had ever tried with combined costs of over £11 million.

Lilly contended that it would be contrary to the common underlying purpose of limiting abusive and duplicative litigation discussed by the Supreme Court in Virgin Atlantic Airways Limited v. Zodiac Seats UK Limited [2013] UKSC 46 for Genentech to be permitted to reargue the validity of the divisional patent de novo.  The Deputy Judge agreed and, on the basis of the Deputy Judge’s findings on the preliminary issue he concluded that:

There was a point of plausibility at the filing date (rather than the priority date) that had not been argued at the first trial (Genentech having been refused permission to introduce the point late in the first proceedings). The Deputy Judge concluded that in the new action Genentech has a real prospect of defending the claim that claims 10 and 11 as proposed to be amended were plausible at the filing date of the divisional patent, on the basis that the common general knowledge had developed sufficiently between the priority date of the said patent.  He therefore refused summary judgment in respect of those claims and stood the application to amend the patent over to the trial of the action.

A copy of the judgment is to be found here: 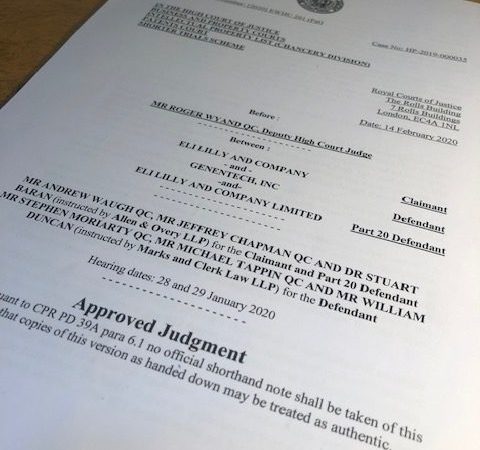