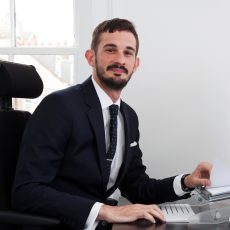 Stuart was Legal 500 Junior of the Year: IP, IT and Media for 2018. In 2019 he was appointed to a three-year term as one of two Standing Counsel to HM Comptroller-General of Patents, Designs and Trade Marks.

He practises in all areas of intellectual property, including: patents, SPCs, trade marks, passing off, copyright, designs and confidential information. He prides himself on being an approachable and modern commercial advocate who enjoys working as part of a team and with all different types of clients and colleagues.

Despite being of relatively recent call, Stuart already has experience as a junior on the biggest of IP cases. He was sole junior to Eli Lilly in its celebrated multi-national battle against Actavis that culminated before the UK Supreme Court with a judgment that defines the modern approach to patents construction. He also appeared before the CJEU in Luxembourg on the ground-breaking Sky v. SkyKick (trade marks) and Sandoz v. Searle (SPCs) cases.

Stuart has appeared unled in the Court of Appeal, High Court, the IPEC, the General Court of the European Union, and the European Patent Office, as well as in trade mark registration proceedings (ex parte and inter partes, at first instance and on appeal) in the UKIPO. He enjoys working with solicitors, patent and trade mark attorneys from a variety of different settings, including in-house lawyers, specialists and non-specialists.

Stuart was recognised as a ranked junior in Chambers and Partners (2014 edition) before his first full year as a tenant was complete, and has been ranked each year since. He is also a “leading junior” for intellectual property in the Legal 500. In 2017/18 he was awarded “2018 Junior of the Year: IP, IT and Media” by Legal 500, and nominated for the equivalent award from Chambers & Partners.

PATENTS / SPCS
Stuart’s patents practice covers all technologies, but with a particular emphasis on life sciences cases. He has appeared at all levels up to and including the Supreme Court – for parties who own patents and parties who challenge them.

TRADE MARKS AND PASSING OFF
Stuart has a flourishing IP practice in courts and tribunals at all levels, dealing with all manner of registration disputes as well as representing brand-owners and defendants in infringement actions. He has appeared successfully (and unled) in fora from the UKIPO upwards, and is one of the few junior advocates with experience of appearing several times as sole advocate in the General Court of the EU.

A keen violinist, Stuart has played often as an orchestra member and soloist; and also has an active string quartet. In 2019 he will become a School Governor at a state academy school in the Midlands. Other interests include food (reading, cooking, and eating), city travel (especially to Italy and the USA) and orchestral concerts.

“He is very bright and gets on top of all of the key issues while also being close to the detail. … He is very client-friendly and switched-on.”

“With an already formidable presence on his feet, backed with a first-class brain and friendly and open client skills, he is one of the rising stars of the IP Bar.’

“In-demand junior who continues to impress instructing solicitors with his work ethic, client care, commerciality and intelligence. He is recognised for his experience in trade mark litigation, and is also well known for his representation of life sciences companies in high-value patent and SPC litigation. […] Excellent junior whose superb judgement would befit a much more senior barrister. […] A star of the future: very user-friendly, easy to discuss things with and clear in his writing and oral presentation.”

“Impresses sources with his innate intelligence, enthusiasm and confidence. A chemist by training, he has proven his mettle in cases involving patents and trade marks, and has further won admiration for his advocacy in the IPEC … Extremely hard-working and shows judgment beyond his level of experience … Exceptionally bright and brilliant with clients, he’s going to be a star.”

“An up-and-coming junior whose appearances as sole junior in deeply complex matters belie his recent call … he has also appeared in major trade mark disputes … He’s very bright and doing a lot of big technical cases, ones which would often go to someone of more senior call.”

“Despite only being called in 2011, he is already developing a reputation as a hard-working junior with a confident grasp of the subject … A real star in the making … He is exceptionally bright and brilliant with clients.”