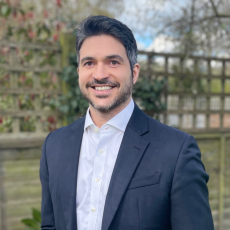 Daniel is ranked in both the Legal 500 and Chambers & Partners for intellectual property law. He practices in all areas of intellectual property law, including patents, trade marks, passing off, copyright, registered designs and design rights and confidential information and commercial disputes involving the same. Daniel is a contributing author to Terrell on the Law of Patents (19th edition, 2020), the leading practitioner textbook on UK patent law.

A selection of cases that Daniel has been instructed on can be found below and on his downloadable CV (February 2022).

Prior to coming to the Bar, Daniel completed an undergraduate Masters degree in Molecular and Cellular Biochemistry at the University of Oxford, achieving a Distinction in the preliminary examinations and graduating with 1st class (Hons) in 2005. He was the only life scientist accepted onto the Life Sciences Interface Doctoral Training Centre (LSI DTC) programme at the University of Oxford, which provided comprehensive postgraduate training in mathematical, physical, computational and engineering science techniques. As a result of this breadth, he is able to grasp all areas of science and technology. Daniel subsequently undertook a DPhil (PhD) in Condensed Matter Physics (bionanotechnology) at Oxford titled “DNA Lattices and Protein Arrays: Novel Approaches to Biological Structure Determination”, which was awarded in 2010. His DPhil thesis was examined as “exceptional for a PhD student” and “timely, thought-provoking, and ground-breaking”. He subsequently continued his research at postdoctoral level and was elected a Fellow of St Cross College, Oxford University.

During his subsequent legal training, Daniel obtained the top merit-based scholarship for both the law conversion (GDL) and Bar training (BPTC) years from Lincoln’s Inn. During his GDL year, he won the prestigious ESU-Essex Court Chambers National Mooting Competition and went on to represent the UK (and win) the 13th Commonwealth Mooting Competition, where he was named the best individual mooter in the Commonwealth final.

Daniel has been instructed on many high-profile cases, as set out below:

Daniel also has extensive experience at the UK IPO and the EU IPO and is one of the most frequently instructed barristers at the UK IPO over the past 5 years (2016-2020):

As a second-year undergraduate student, Daniel developed a keen interest in neuropharmacology. He proposed the notion of complex neuropsychobiological interactions between certain drugs, which rationalised a large amount of experimental data and led to publications in the Journal of Neural Transmission and Journal of Psychopharmacology, where he was attributed.

• Contributing author to Terrell on the Law of Patents (19th edition 2020), the leading practitioner textbook on UK patent law
• Daniel has been an invited speaker on intellectual property law and procedure to delegates from the Chinese Ministry of Commerce and Judges of the Supreme Court of the Republic of China. He has also been interviewed by Bloomberg Law for his trade mark expertise and has published several commentaries on legal cases
• Daniel remains active in mooting as a coach and as judge. He coached the Oxford team at the Oxford IP International Moot in 2017 to the semi-finals and was a judge in 2019. He was also a judge of the Kings College London IP Moot in 2020

“Daniel is frighteningly brilliant and very personable.” “His level of knowledge is phenomenal and he is able to grasp the case quickly. I class him as a rising star.” “He mastered the technologies of the patents at issue incredibly rapidly, with his formidable intellect. He has been a fantastic advocate.”

“Very approachable, provides responsive, well thought out advice and is an impressive advocate.” “He’s got a technical background and is very good on the science. He’s also commercial, and a very good team player who is quick to roll up his sleeves.”

‘Excellent knowledge of trade mark laws and provides a clear explanation of his views on the merits of cases.’